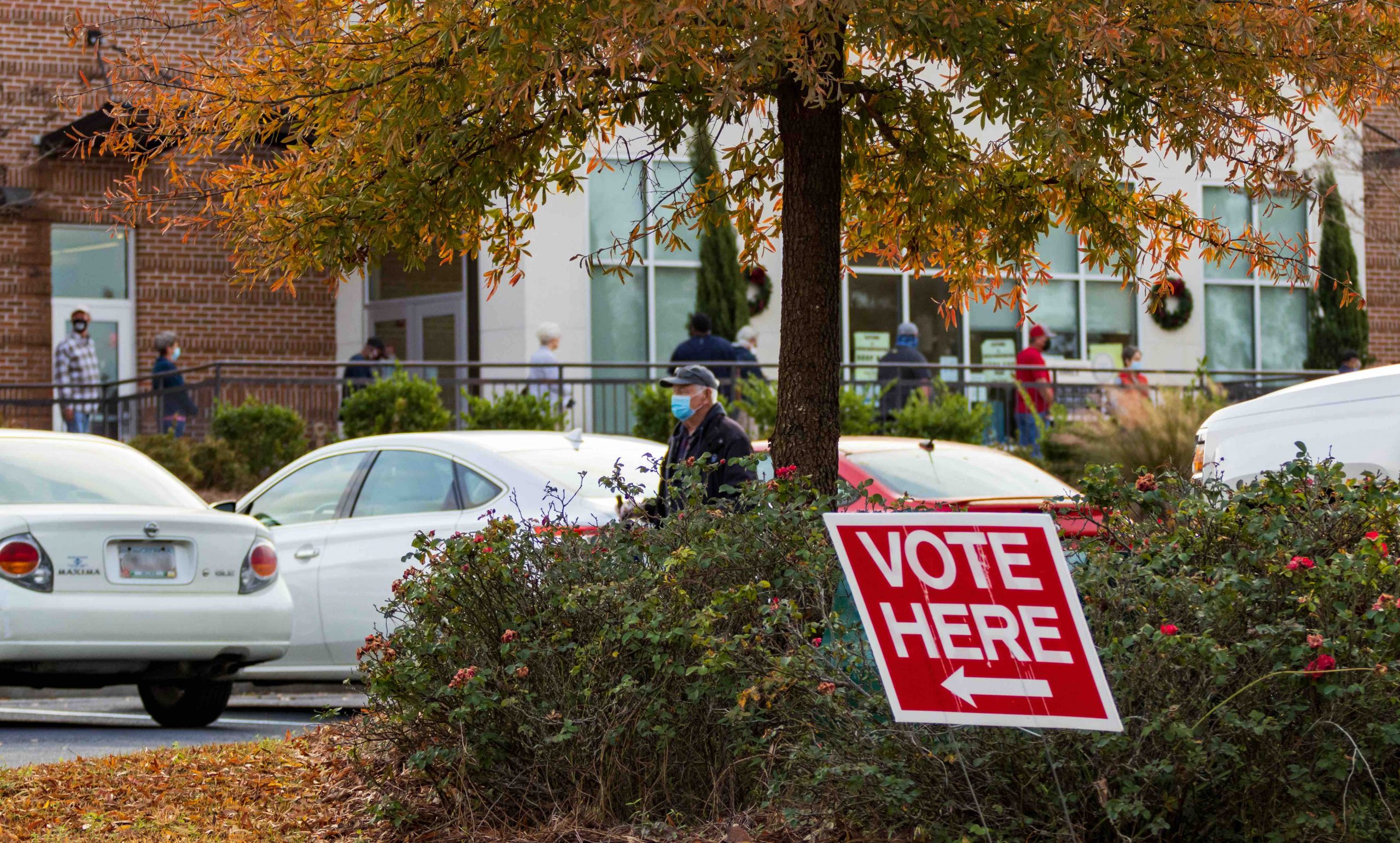 A voting location in Statesboro, Georgia, in 2020. (Joe Lafoon via Shutterstock)

The Supreme Court on Friday reinstated a federal trial court’s order that barred officials in Georgia from using “at large” elections for the state’s Public Service Commission. The trial court ruled this summer that the at-large elections violate federal voting laws by diluting Black votes, but a federal appeals court put it on hold last week. In a brief unsigned order, the justices granted a request to lift the ruling by the U.S. Court of Appeals for the 11th Circuit, explaining that the court of appeals had applied the wrong legal rule in reaching its decision.

The victory could be a fleeting one, however, as the justices left open the possibility that when the dispute returns to the lower courts, the court of appeals could reconsider its ruling putting the district court’s order on hold until the state’s appeal is resolved. There were no dissents recorded from Friday’s order from the Supreme Court.

The state’s Public Service Commission regulates (among other things) rates for electricity, natural gas, and telephone companies. The commission has five members, who are elected in partisan elections for staggered six-year terms to represent five districts in the state. But although each member represents one district, the elections are statewide – that is, all voters in the state can cast a ballot.

Four Black voters went to court in July 2020, challenging the state’s use of an at-large system for the PSC elections. They contended that the at-large scheme violates Section 2 of the federal Voting Rights Act, which prohibits discrimination in voting, by diluting the strength of Black voters. Although roughly 30% of Georgia residents are Black, they note, the commission has had only one Black member, who was first appointed by the governor, since it began statewide elections in 1906.

U.S. District Judge Steven Grimsberg agreed with the challengers. On Aug. 5, he issued an order that barred Georgia Secretary of State Brad Raffensperger from using the at-large method in the November 2022 election, in which two of the five seats on the commission are at stake. Grimsberg also directed the state to leave the commissioners who currently hold the two seats up for election in office until it can hold an election using single-member voting districts.

Raffensperger then went to the 11th Circuit, which put Grimsberg’s ruling on hold. In an unsigned ruling on August 12, the court of appeals relied on an election-law doctrine known as the Purcell principle, the idea that federal courts should not change state election rules shortly before an election. When Grimsberg issued his order, the court of appeals noted, the election was approximately three months away, and postponing the commission elections would “fundamentally” change them.

The challengers came to the Supreme Court three days later, asking the justices to freeze the 11th Circuit’s order “to prevent Public Service Commission elections from proceeding in November under a system that unlawfully dilutes the votes of millions of Black voters in Georgia.” The court of appeals should not have relied on the Purcell principle, they wrote, because the state had not made that argument in the lower court. To the contrary, the challengers emphasized, the state had told the district court that its preparations for the November election would not be disrupted as long as the court ruled by Aug. 12.

The state urged the justices to leave the 11th Circuit’s order in place, allowing the November elections to go forward using the at-large scheme. It doesn’t really make a difference for the challengers whether the order is lifted or not, the state suggested. If the 11th Circuit’s order remains in place and the election goes forward, the state reasoned, the state can use a new scheme going forward if the challengers ultimately win on appeal. But if the justices block the 11th Circuit’s order, no one gets to vote for candidates for the commission in November, and the state would still have to have a special election using the new scheme if the challengers prevail. The district court’s ruling also should have given more weight to the possibility that votes are not being diluted by race under the at-large scheme, the state wrote. Instead, the state argued, the key issue is partisanship – that is, Black voters prefer to vote for Democratic candidates, no matter what their race.

In a one-paragraph order on Friday morning, the justices granted the challengers’ request to vacate the 11th Circuit’s ruling and revive the district court’s order prohibiting the state from using the at-large system for the upcoming commission elections. The state’s plea to put the district court’s order on hold, the Supreme Court explained, relied on the traditional test used by courts to decide whether to grant a stay of a lower court’s ruling. However, the court continued, the 11th Circuit didn’t use that test, relying instead on the Purcell principle. The 11th Circuit should not have used the Purcell principle, the justices said, when the state itself had assured the district court that it would have enough time to make any needed changes to the election process if the district court acted by Aug. 12.

The case now returns to the court of appeals. The challengers’ victory could prove to be a temporary one, as the justices left the door open for the 11th Circuit, applying the proper test, to once again put the district court’s order on hold until it rules on the merits of the state’s appeal.