One year ago, the Supreme Court had just ended a term of transition. Justice Amy Coney Barrett had replaced Justice Ruth Bader Ginsburg, cementing a 6-3 conservative majority. Yet the court issued more unanimous decisions than in the three preceding terms, and some major rulings showed compromise or were narrow in scope. We wrote at the time that although the court’s six conservative justices were dominant, they were divided on how quickly to push the law in new directions.

This term, the conservative majority remained dominant but was no longer divided.

The 2021-22 term — one of the most momentous in the court’s 233-year history — was defined by conservative milestones on abortion, guns, religion, and climate change regulation. But a statistical analysis of the full merits docket shows that the court’s rightward shift runs even deeper than those blockbuster cases. Unanimous decisions sharply declined as 6-3 outcomes surged. The conservative justices showed high levels of agreement. And the three liberal justices dissented at the highest rates of their time on the court.

The findings in this article are based on SCOTUSblog’s Stat Pack, an annual collection of Supreme Court data.

Reduced unanimity and the rise of the 6-3 court

This term, only 29% of the court’s decisions on the merits were unanimous. This is a sharp drop from the 43% average over the past decade. And for the first time in recent memory, 9-0 was not the most common vote alignment. Instead, 6-3 was the most common alignment, with 30% of cases being decided along those lines. 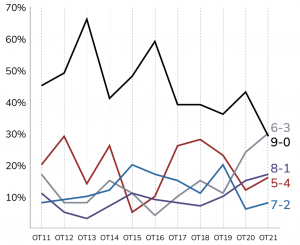 Most of those 6-3 decisions — 14 out of 19 — were polarized along ideological lines, with the six conservative justices in the majority and the three liberal justices in dissent. Most notably, the six conservatives voted as a bloc to broaden Second Amendment rights, expand the role of religion in public life, and limit the Environmental Protection Agency’s authority to regulate carbon emissions. (The six conservatives also were in the majority in Dobbs v. Jackson Women’s Health Organization, though one of them — Chief Justice John Roberts — wrote that he preferred a narrower result and would not have overturned Roe v. Wade.) And in other lower-profile but highly consequential decisions, the conservatives voted together to strike down a campaign-finance law, restrict relief for prisoners challenging their convictions, and limit the ability of citizens to sue police officers and federal agents for alleged constitutional violations.

That’s not to say that the liberal justices did not achieve any victories in closely divided cases. Of the 10 cases decided by a 5-4 vote, seven reached what we define as liberal outcomes, where two of the conservative justices joined the three liberal justices in the majority. But 5-4 cases are no longer accurate reflections of the court’s ideological direction.

Roberts and Kavanaugh exert their influence

Roberts and Justice Brett Kavanaugh remain in positions of power as the court’s median justices. They were in the majority in 95% of the court’s decisions, and dissented only three times each. In fact, in a sign of how much they are in lockstep, their dissents were in the same three cases.

As has been true in each of the past three terms, Roberts and Kavanaugh voted together more than any other pair of justices. But there were also signs of increased unity across the conservative wing. For instance, Roberts’ rate of agreement with Justice Clarence Thomas (the most conservative justice) was higher in 2021-22 than in any of the prior four terms.

Voting statistics also reveal the  liberal justices’ waning influence. Justices Stephen Breyer, Sonia Sotomayor, and Elena Kagan each notched their lowest rate in the majority since they began serving on the court, at 68%, 58%, and 69% respectively. Sotomayor, for the second term in a row, dissented in over half of divided cases.

Another trend that can be gleaned from the frequencies is Justice Neil Gorsuch’s relative unpredictability. Although he is generally considered one of the three most conservative justices, he joined the liberals in dissent in several cases, penning fiery dissents in Oklahoma v. Castro-Huerta and Patel v. Garland. Gorsuch’s 75% rate of voting in the majority was the lowest rate among the conservative justices this term.

Collectively, the justices wrote slightly more opinions than they did in the prior two terms, though the number of cases the court granted for argument continues its gradual trend downward. Sotomayor and Thomas, the justices at the court’s ideological poles, were the most prolific writers, as usual. In Thomas’ case, that was driven by a high number of concurrences, and in Sotomayor’s case, it was driven by a high number of dissents. Sotomayor wrote 13 dissents, outstripping the number of dissents she wrote in any previous term. Justice Elena Kagan, generally known for rarely writing concurrences, wrote four of them this term, along with seven dissents and six majority opinions. Her 17 total opinions were a personal record.

After a landmark and turbulent term, there are no signs that the court is slowing down. The justices are already slated to hear three blockbusters after they return to the bench this fall: cases on affirmative action, religious exemptions from non-discrimination laws, and the authority of state legislatures to regulate elections. The court that will hear these cases will have a new member: Justice Ketanji Brown Jackson. But the ascendant conservative majority likely will remain very much intact.