This article is part of a symposium on the court’s decision in New York State Rifle & Pistol Association v. Bruen.

Saul Cornell is the Paul and Diane Guenther chair in American history at Fordham University and adjunct professor of law at Fordham Law School.

The majority opinion in New York State Rifle & Pistol Association v. Bruen invokes the authority of history but presents a version of the past that is little more than an ideological fantasy, much of it invented by gun-rights advocates and their libertarian allies in the legal academy with the express purpose of bolstering litigation such as Bruen. Rather than applying a history, text, and tradition approach, it would be more accurate to characterize Justice Clarence Thomas’ decision as an illustration of the current Supreme Court’s new interpretive model: “Fiction, Fantasy, and Mythology.” Indeed, the distortion of the historical record, misreading of evidence, and dismissal of facts that don’t fit the gun-rights narrative favored by Thomas are genuinely breathtaking in scope. Thomas has taken law-office history to a new low, even for the Supreme Court, a body whose special brand of “law chambers history” has prompted multiple critiques and been a source of amusement for generations of scholars and court watchers.

It is particularly noteworthy that Justice Stephen Breyer called out his colleagues for engaging in the most rank form of law-office history in his dissent. Although it has become common, almost routine, for scholars to catalog the embarrassing quality of the current Supreme Court’s uses of history, it is unusual to see a sitting justice level this charge against others on the court in a published opinion. It is hard to dispute Breyer’s negative characterization of his colleagues’ tendentious, error-filled, and highly selective culling of evidence to vindicate their gun-rights agenda. Bruen does mark a new low for the court. Indeed, it seems appropriate that Thomas saw fit to quote Dred Scott, the court’s worst decision in history, approvingly. Thomas not only treats the case as good legal authority but suggests the author of the most reviled opinion in American law captured the meaning of the Second Amendment better than any other judicial pronouncement in American history.

To describe the Thomas version of the past as a caricature understates the case. In the Bizzaro constitutional universe inhabited by Thomas, Shakespeare’s England was filled with pistol-packin’ peasants, a notion that most English historians would find bonkers. The characterization of early American firearms regulation is equally flawed, and Thomas rests his dismissal of antebellum enforcement of gun laws on an as yet unpublished and error-filled account by one of his former clerks — even as he dismisses the many counter-examples provided by New York as a slender reed upon which to rest their case.

Perhaps the most egregious distortion of the historical record occurs in the majority’s false claims about regulation during Reconstruction. Evidence of robust regulation of guns in public featured prominently in the briefs filed in the case, but the majority either dismisses contrary evidence as unrepresentative or simply ignores evidence it finds inconvenient. Here is what Thomas says about Texas, a state whose robust gun laws, he reluctantly concedes, undeniably support New York’s approach to public safety. “We acknowledge,” Thomas wrote, “that the Texas cases support New York’s proper-cause requirement, which one can analogize to Texas’ ‘reasonable grounds’ standard. But the Texas statute, and the rationales set forth in English and Duke, are outliers.”

The originalist methodology applied by Thomas has one set of rules that apply to interpreting legal texts that support gun rights, and another more demanding set of standards that apply to those that undermine them. The Thomas version of originalism might be summarized as follows: No amount of evidence is enough to support gun control, but no iota of evidence is too little to legitimate gun-rights claims. If one of the goals of originalism was to limit judicial discretion (a value few originalists continue to espouse now that they have a supermajority on the court), then the Thomas rule does the opposite. It provides a license to cherry-pick evidence with reckless abandon if the materials support the ideological agenda of the Federalist Society.

Texas, it is worth stressing, was hardly alone in embracing a robust view of state police-power authority over regulation of arms in public. Georgia’s 1868 arms-bearing provision declared that: “The right of the people to bear arms in defense of themselves and the lawful authority of the State, shall not be infringed, but the Legislature may prescribe the manner in which they may be borne.” The reconstructed southern states and newly admitted western states all drafted new arms-bearing provisions in their state constitutions, casting aside the Founding-era focus on militias, substituting new language more individualistic in focus. Justice Samuel Alito recognized this fact in McDonald v. City of Chicago but stopped reading the text of these provisions in mid-sentence because all these provisions went on to affirm the sweeping police-power authority of the states to regulate arms in public. In District of Columbia v. Heller, Justice Antonin Scalia read the Second Amendment backward, and in McDonald, Alito stopped reading the text mid-sentence. If anyone had any doubts that the new originalism was the Federalist Society’s latest intellectual scam, then these two approaches to reading constitutional texts ought to dispel any lingering doubts. In the hands of this court, originalism is a constitutional “Etch A Sketch,” in which judges can erase texts at will and read them backward if necessary.

Twelve million Americans during the Reconstruction period were living under state constitutional arms-bearing provisions that reflected this new regulatory paradigm, a model that forged an indissoluble link between the right to regulate and the right to bear arms. For Thomas, twelve million is too little to be consequential. The court’s right-wing originalist supermajority, including Thomas, Alito, and their ideological co-conspirators, are making up the rules of evidence and historical interpretation on the fly, constantly shifting the burden of proof, to suit their agenda.

Even more galling, assuming that historical accuracy is still a value for the court’s originalist ideologues, is the absence of any attention to local gun regulation, which increased dramatically during Reconstruction. Contrary to the patently false claims made by Thomas, states and localities acted on the language in the new state arms-bearing provisions, including enacting permit schemes based on a specified need for self-defense, precisely the type of regulatory regime at issue in Bruen. Thomas treats New York’s law as if it emerged out of nowhere in the early 20th century, but the truth is that a host of localities had enacted similar laws starting in the 1870s, which means that New York’s law was firmly rooted in Reconstruction-era conceptions of the scope of permissible regulation under the Second Amendment.

Many of these laws, excavated from obscure sources, were presented to the court in a remarkable appendix to a brief submitted by Air Force historian Patrick Charles. This evidence contradicts Thomas’ facile claims that Texas-style gun control was an anomaly. Nor does Thomas acknowledge the evidence presented in the historians and law professors’ brief submitted in Bruen. It discussed the spread of permit schemes in California and other parts of the nation after the Civil War. By the last decade of the 19th century, more than half the population of the state living in its cities and towns were living under these types of restrictions. Again, in the surreal originalist universe inhabited by Thomas and his colleagues, if 50% of a state lived under New York-style restrictions, this also fails to reach a sufficient threshold to provide historical evidence supporting gun regulation.

Nor were these restrictive public-carry regimes an exclusively western development. In 1873, Jersey City prohibited carrying dangerous weapons without a permit, which the city’s municipal court could grant to people “from the nature of their profession, business or occupation, or from peculiar circumstances.” Jersey City was hardly one of the “cattle towns” of the Old West, another body of evidence that Thomas simply discounts because it is inconsistent with his ideological agenda. The map below graphically underscores how wrong Thomas got the history in Bruen. It shows that millions of Americans were living under restrictive public-carry laws similar in scope to the New York law at issue in Bruen for decades before the Sullivan Act.

Distorting the past to further his ideological agenda has become a trademark feature of Thomas. What is more disheartening is that the court’s newest originalists, Justices Neil Gorsuch and Amy Coney Barrett, signed on to this historical charade. Despite protestations that they are not ideological warriors and political hacks, Gorsuch and Barrett missed an opportunity to prove that originalism can be applied in a rigorous and neutral manner. Apparently, that claim continues to a be a promise as yet unfilled. 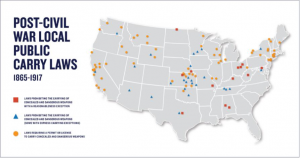 Graphic courtesy of Hastings Constitutional Law Quarterly, Saul Cornell, “History and Tradition or Fantasy and Fiction: Which Version of the Past Will the Supreme Court Choose in NYSRPA v. Bruen?” (June, 2022).